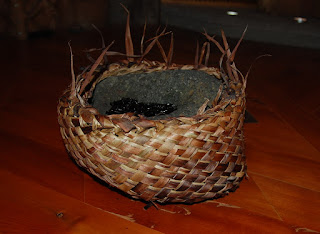 Based on a Maori Legend
This Maori legend is associated with Rangitoto where I grew up. 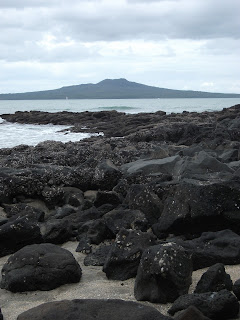 Matakamokamo lived on a mountain called Te Rua Maunga, that stood on the site of Lake Pupuke (Pupuke Moana) with his wife Matakerepo.  One day he asked his wife to weave him some new garments but he was displeased with the finished garments which led to a bitter argument.

While they argued their house fire went out and could not be rekindled.  Matakamokamo cursed Mahuika, the goddess of fire, and as a result she called on her fellow deity Mataaho, the god of earthquakes and eruptions, to punish the couple.

Mataaho caused Te Rua Maunga to sink beneath the earth, leaving Pupuke Moana (Lake Pupuke) in its place.  At the same time he caused Rangitoto to rise from the sea offshore, and Matakamokamo and his wife Matakerepo fled to its peaks in panic with their maid.

When mist surrounds Rangitoto, it is the tears of the Tupua couple as they weep over their lost home.

Method of construction:
A whiri kete (basket) has been woven around the volcanic stone.  The stone reflects the mound of Te Rua Maunga and the heart shape of Lake Pupuke today.  I often use rocks in my work to "ground" the work, here it also adds an element of permanence and weight that contrasts and compliments the lightness, flexibility and fragility of the harakeke.

Mature, marked blades of harakeke were harvested so the fibre would dry to golden yellow, red and brown-black tones and hues to reflect the volcanic fire.  Tips of the leaves were left projecting upwards to create the impression of burning trees when doing the top lock off.

When finished I overlaid iridescent leaves of red, pale gold and deep red-black from korari stalks of mountain flax (phormium cookianium). This process allowed me to add highlights of light and dark to give the effect of fire, lava and embers.

The intense, reflective blackness of the harakeke seeds creates the illusion of sunlight reflecting on the wind-swept lake.


The legend speaks to me of a warning on the consequences of criticism, unjust anger and blame within a relationship.  These elements “put out the fire” of love and respect and the eruption and punishment, the destruction of that which is most important to us, our “place of home” or for me my spirit and sense of self worth, speaks to me of the natural consequences.  It tells us of the grief and loss that results for all.

“An Imperfect Kete” is made to be imperfect with flaws and slightly rough weaving like the imperfect “garment” made by the wife.  By valuing only value what is “perfect”, we lose the ability to enjoy the beauty of what we have and risk losing much more – our home/spirit/heart which leads to the loss and grief told of in the legend.

My imperfections are something to be embraced bringing individuality, character and depth to myself as a women, this is woven within my kete.

The Heart of the Stone – the heart/spirit which is woven within the kete.
The volcanic stone comes from the land, it is of the land.  Created in a violent eruption, it records its own story.  For me this stone represents life’s experiences and lessons that cannot be changed.  It represents the past and the now. This element provides a sense of permanence to the work to carry the lesson of this myth forward to others – a warning to take care and beware.

Posted by Michelle Mayn at 2:40 PM No comments: 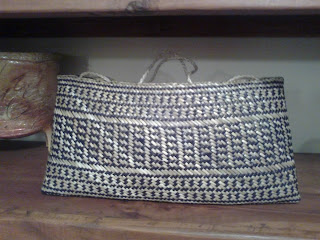 This piece is woven in a traditional style with muka (harakeke fiber) handles that can be used to draw the sides together.


"A pattern can be created from a combination of elements when plaiting.  One element that determines the pattern is the whakapapa, this is the arrangement and sequence in which the strips are laid out at the commencement.  Another element is the use of colour, frequently seen as all the strips lying in one direction being one colour, while those lying in the opposite direction are of another colour.  Once the work has been commenced with this arrangement, patterns can be achieved by changing from check to twill strokes.  Other types of whakapapa allow for the creation of other patterns.

The mahitihiti group of patterns is known over a very wide area by variations of the name such as mawhiti, mawhitiwhiti, kowhiti, kohitihiti. Sometimes a descriptive term differentiates if the pattern is horizontal (whakatakoto) and vertical (whakatutu) arrangements.

This pattern is formed by changing the stroke from a vertical twill to a horizontal twill, sometimes referred to as “one-two, two-one”.  Pae is used in western districts to describe horizontal patterns. Kahu TeKanawa references the kowhiti whakapae pattern as relating to harvesting of food crops

Posted by Michelle Mayn at 7:41 AM No comments:

Through durational processes and time spent with the natural world, Michelle Mayn combines harakeke fibre with found materials using processes of weaving, binding, twining, and knotting that stem from a practice of Maori weaving. Mayn's process-based practice places primacy on materials and the actions or events of making. Through detailed manual processes and durational techniques, material, light, form and movement are combined to create ephemeral object-based installations and sculptures that explore the mauri (life force) of materials beyond the world of sense perception.

Mayn was born in Auckland in Aotearoa, New Zealand and studied Traditional and Contemporary Maori Weaving at Unitec in 2011 and mixed media at The Art Students League of New York in 2017. Mayn has exhibited in New Zealand and the United States since 2010 and has recently completed an MVA at Auckland University of Technology.